All Adagio aparthotels in London: the services of a hotel, the freedom of an apartment for your stay in London 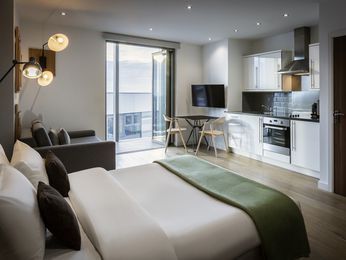 The ideal aparthotel for your trip to London

The Adagio London Brentford is situated in Greater London, in close proximity to the historic city centre of the United Kingdom’s capital. With its well-equipped apartments, this modern aparthotel is ideal for both business and leisure travellers. On site, you will find all that you need to make your stay as comfortable as possible, including a fitness suite, laundry facilities and meeting rooms, along with a range of services ranging from breakfast facilities to high-speed internet access.

By choosing to stay at the Adagio London Brentford aparthotel, you can make the most of your time to explore London, whilst at the same time guaranteeing comfort and serenity within Europe’s busiest city. The Adagio London Brentford aparthotel is well-connected by the motorway linking Heathrow Airport to the centre of London, a journey which can also be made by travelling on the Piccadilly Line from the nearby South Ealing underground station. Your aparthotel is situated between Wembley and Twickenham Stadiums, as well as being a stone’s throw from the Royal Botanic Gardens at Kew. You could also relax by trying your hand at stand-up paddle boarding on the Thames, or by sampling traditional British ales from a selection of nearby pubs.

London: the economic and tourist capital of England

Whether you’re travelling to the English capital for work or leisure, a well-furnished Adagio apartment is the perfect place to stay. The Adagio London Brentford aparthotel offers you the chance to enjoy a range of tourist sights around the capital, ranging from historic monuments to museums, theatres to concert halls, live performances to popular sporting fixtures, all of which await you in the city.

Taking a stroll through the streets of London offers you a world of opportunities, whether you’re wandering from Notting Hill towards Covent Garden, or from Buckingham Palace to Westminster via Oxford Street to admire the unmissable Big Ben. For history fans, the British Museum or the Tower of London built by William the Conqueror are a must-see, just as Harrods and Knightsbridge are for those planning a shopping spree.