Aparthotel in the Netherlands 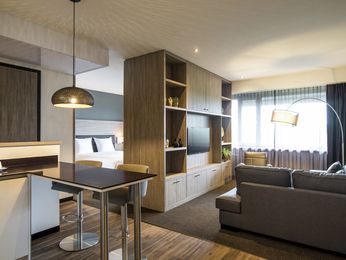 To enjoy your holiday or business trip in the Netherlands to the fullest, why not combine comfortable accommodation with a charming destination? Newly created, Aparthotel Adagio Amsterdam City South is a gateway to the Dutch capital. You are welcome in one of the 151 fully equipped and undeniably comfortable apartments.

From studios to 76m² two-bedroom flats, Aparthotel Amsterdam's apartments have all the amenities you need. With a kitchen, bathroom, and comfortable beds, our rooms also come with a telephone, a television, air conditioning, internet access, and an iron and ironing board. To ensure that your stay is a success, several services are also available to you, such as self-service laundry, luggage storage, and photocopying/printing. Located near the tram station, the apartments are only about 20 minutes away from the city centre.

The diversity of tourism in the Netherlands

The location of your Aparthotel in Amsterdam will give you the chance to discover countless of the city's treasures and the charm of the Netherlands. A city steeped in history and culture, the Dutch capital will undoubtedly seduce you by its diverse museums, including the Rijksmuseum, the Anne Frank Museum, and the Van Gogh Museum, but also by its stunning architecture. To enjoy Amsterdam's irresistible atmosphere, there is nothing better than a delightful stroll along the canals for which the town is known. Not far from Amsterdam, many other Dutch cities boast magnificent historic centres, such as Maastricht, known for its majestic cathedral and its charming cobblestone streets, or Leiden, Rembrandt's hometown. Your trip to the Netherlands will also be an opportunity to enjoy the surrounding nature, such as the countless blooming fields across the country, not to mention some entirely preserved coastlines. For instance, the Wadden Sea Islands are one of the most beautiful natural sites in Europe.