All Adagio aparthotels in Ukraine: the services of a hotel, the freedom of a flat for your stay in Ukraine 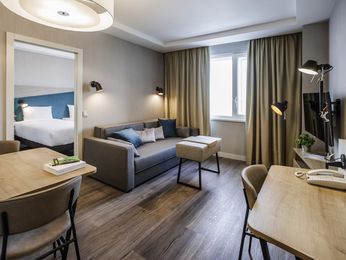 Close to the metro/bus with fitness center and swimming pool

An aparthotel in Ukraine for your trip to the country

Ukraine is a country that links Europe and Asia, with a mix of Slavic and European traditions, and offers a journey of discovery and wonder to all nature lovers. Discover Kiev, its capital, travel from the beaches of Odessa to the thermal springs of Myrhorod through the forests of the Ukrainian Carpathians, Adagio accompanies you in the preparation of your trip in Ukraine.

What to see during your trip to Ukraine ?

Don't worry, urbanites and fans of architecture will not be left out, many cities such as Poltava, Lviv or Chernivtsi and their districts classified as Unesco World Heritage Sites will reveal their charms as you walk through the streets. Kiev is also worth discovering, as the Ukrainian capital hides some of its monuments in "caves". Finally, the visit of Chernobyl for the most curious is done under appropriate safety conditions, and requires prior arrangements for your trip to Ukraine as well as appropriate clothing. It is also compulsory to take a guide to visit Chernobyl and the ghost town of Prypiat.

Discover Odessa, the pearl of Ukraine

Founded over 200 years ago, Odessa is now one of Ukraine's largest cities and its number one tourist attraction. Film buffs will remember the pram scene in the 1925 film Battleship Potemkin, which was filmed in the city on the Potemkin Stairs. Take a stroll up the stairs to discover a view of the port. From there, you can explore the Ukrainian ramblas, commonly known as Primorsky Boulevard, the waterfront promenade. Head for Odessa's beaches, especially Lanzheron beach, close to the city centre. If you want a little more peace and quiet, don't hesitate to go to Otrada beach, which can be reached on foot or by cable car.

If you want to take advantage of your trip to Ukraine to recharge your batteries, don't hesitate to go to Myrhorod to discover this thermal spa. Its waters are renowned for treating digestive disorders, but you can also enjoy a swim in its pools or take advantage of your holiday during a relaxing afternoon on the Khorol river. You can also rent a boat and enjoy a day on the water.

Many Ukrainian cities have buildings or even districts listed as Unesco World Heritage sites. The western city of Chernivtsi, whose national university is a UNESCO World Heritage Site, is a city known for its cafes, bookstores and book stalls. Lose yourself in its streets and enjoy the general relaxed atmosphere of the city. Moreover, the city is close to the Ukrainian Carpathians, a region of all mysteries but above all of very beautiful walks and hikes. If you are more interested in painting and art galleries, you can visit Lviv and the National Art Gallery, where almost 50,000 works of art await you. Many monuments and buildings are listed as Unesco World Heritage sites, and your walk through the streets of Lviv will soon be like visiting a new museum, as architecture is elevated to the level of art here. Finally, don't hesitate to go to Zhokovka if you're a fan of religious buildings, as the Church of the Holy Trinity has recently been listed by UNESCO. Its wooden construction dates back to the 18th century and is listed as a Ukrainian national monument. Finally, don't hesitate to visit the Saint Lawrence Church, a symbolic building of the city, thanks to its domed roof.

The Ukrainian capital is an essential stop on your trip to Ukraine. There are many monuments in the city to see or visit, from 'caves' to more traditional buildings. Joking aside, the Kiev Cave Lavra is a Ukrainian Orthodox monastery with golden domes, but where you can admire underground churches, some of which house the mummies of revered monks. You can't visit Kiev without seeing St Sophia's Cathedral, a UNESCO World Heritage Site. Golden roofs perched on a building with thirteen domes and measuring nearly 29 hectares make it one of the symbols of the city and even the country. The statue of the Motherland is also a must-see before heading to Chernobyl, for a darker part of your trip to Ukraine.

Visiting the Chernobyl power plant, the forbidden zone and the ghost village of Prypiat is done in groups and under regulated conditions. You cannot go alone, and the visit takes place between spring and autumn only. The mandatory clothing consists of long-sleeved tops, trousers and closed shoes. In the end, you will only spend 3-4 hours at the site of the largest nuclear explosion in history, enough time to experience the disaster that befell the city on 26 April 1986. Visit between the debris of the nuclear power plant, where it all began, and the village of Prypiat, where it all ended. Time has suspended its flight here, leaving nature to take its place among the debris of a life that was stopped dead in its tracks more than 30 years ago. Visiting Chernobyl is an invaluable part of your trip to Ukraine, so don't hesitate to prepare your stay and your excursions.

What to see in Ukraine?